As sixth-year coach Jamion Christian wrapped up preseason practice number three Monday evening, a summer removed from one of the most accoladed seasons in Mount St. Mary’s men’s basketball history, his mind circled back to one determinant.

Yes, the Mount are fresh off a Northeast Conference title and NCAA tournament run — where they went toe-to-toe with powerhouse Villanova in a round of 64 game — but after being snakebitten by college basketball’s transfer circus, a roster that wasn’t supposed to lose a starter now has 11 players who have never played at the collegiate level.

It’s a double-edged sword. Out goes your leading scorer and fearless floor general, Elijah Long (Texas); dynamic wing, Miles Wilson (Miami); and top big-man, Mawdo Sallah, but in comes what could be the best recruiting class Christian has ever assembled, largely due to the frantic rush to fill voids.

Repeating as conference champions and embarking on another NCAA tournament run will hinge on one aspect more than it ever has before in Emmitsburg: Can Christian and his staff maximize the personnel in place for 2017-18?

“The challenge is, can you get the most out of this year’s group? It’s like a squeezer. You have to squeeze everything you can to get the most out,” Christian said. “If we’re able to do that, who knows how good we can be.

“I think last year, we were close, but didn’t complete the task. I think our guys understand now, ‘Hey, what we do in practice works. What we’re trying to establish, culture, [that] works. Now it’s all about finding that mindset. … I look at it as a standpoint that we’ve really improved. The first time we played Villanova [90-59 loss] to the second time we played Villanova [76-56 loss, down 30-29 at half], we really improved.”

This isn’t the first time Christian has had to cope with roster turnover. Last fall, seven players didn’t see any time in a Mount uniform the year prior, and it’s safe to say things panned out well. It’s a product of Christian and his staff’s developmental blueprint, transforming raw talent into household assets.

All three players who left — Long (15 points, 5.2 rebounds, 4.4 assists a game), Wilson (14.1 points game over last seven games of season) and Sallah (6.1 points, 5.3 rebounds a game) — were practically non-factors in 2015-16. One way or another, new faces are going to need to emerge once again this season for the Mount, which boasts a roster of 11 freshmen (three redshirt, eight true), one sophomore in 6-10 center Ryan Gomes and a trio of established seniors in 5-foot-5 lead guard Junior Robinson, 6-8 forward Chris Wray and 6-5 guard Greg Alexander.

“I think we have a formula here that works,” Christian said. “We’re going to trust in that process that we’ve used that’s allowed us to be successful.

“Everything is about getting everyone in the program to realize they’re important. Everyone has a role that’s really important. No matter how big or small it is on the floor, your obligations on the team is far more important than, say, your points per game. I think we have a great group of guys that understand that.”

The only other player who saw minutes last year was Gomes, who shot a team-best 61 percent from the floor and averaged a bucket a contest in 6.5 minutes per game. The Westminster native has drastically improved his health and game as a whole for an expanded workload this season.

You can pencil in Robinson, Alexander, Wray and Gomes into the lineup for 2017-18. But what about everyone else?

Donald Carey, who averaged 16 points and four assists for Frederick Douglass in an ultra-competitive Prince George’s County last winter, figures to be the most likely freshman to slot into the starting five. Carey gives Christian a dimension he’s never had before at the Mount as a 6-5 lead guard, and he wouldn’t be in Emmitsburg if Long hadn’t transferred to Texas. The PG County native has a great feel for the floor along with the pick-and-roll system and should coincide with Robinson nicely.

Antonio, a native of Australia, shot over 40 percent from behind the arc for Sunrise Christian Academy as a senior in 2015-16. He redshirted last season and will be a lethal presence from 3-point-land this year.

Planutis, who shot 43 percent from deep while averaging 23 points and eight rebounds at Bridgton Academy (Maine), brings a high-level offensive package to the Mount with size, shooting, passing and the luxury of playing multiple positions.

Opoku (11.3 points, 3.4 blocks as a senior) has a menacing 7-3 wingspan and fits the mold of “Mount Mayhem” with his energizing play above the rim. He’ll also take a load off Wray in the frontcourt and is a proven winner, capturing a state title with Potomac High School (Va.) his junior year.

Habwe (13.5 points, seven rebounds as a senior), who played down the street at St. James School in Hagerstown, has the physical attributes and strength of an upperclassman along with an outside stroke.

Stallings, like Opoku, will ease the load off Wray in the frontcourt with towering length and defensive prowess.

West (19.8 points and 43 percent from deep), meanwhile, is a smaller lead guard, but has an “elite ability to score,” Christian says. Dedolli, native of Albania, is another 3-point sniper and played on the Albanian U18 national team in the FIBA EuroBasket championships, averaging 10.3 points in 26.3 minutes per game. Vukelvich, who redshirted last year, is another towering body in the front court at 6-9.

Walk-ons Brandon Leftwich, a 6-2 lead guard from Brooklyn, New York and 6-7 forward Ross Young from nearby Sidwell Friends School (D.C.) round out the roster.

Christian plans to go nine or 10 deep this year, but will have to make a tough decision of redshirting two or three of his eight true freshmen before solidifying rotations.

“I think we have more pieces than we had a year ago,” Christian said. “It’s just those pieces are yet undefined. … It’s interesting, it’s different. I think our lack of [selfishness] and us having humility to coach them at a high level, I just don’t see a ceiling for this year’s team. … “Without ego, you can grow to an unbelievable level.”

“It doesn’t mean you’re going to be successful, because you still have to gel, but I like those components that we have,” he said. “And I like our hunger. I can’t say that about previous teams, but I can say that about this one.”

Robinson, the Mount’s fearless leader and an internet sensation being the shortest player in Division I men’s college basketball, provided an unclear answer.

“Honestly, it’s kind of hard to say,” he said. “I mean, you could say we have a lot pieces, but at the same time, we don’t really know what they can do. … But from what I see, we have a really talented group. I think we’re going to be fine. It’s the coach’s job to go out and get talented guys, I think he’s done just that.”

The Mount will continue to sculpt this year’s group as its Nov. 10 opener at Marquette nears. Before that, they have scrimmages against Bucknell (Oct. 22) and Division III Hood (Nov. 4).

Questions will continue to cloud Robinson and the Mount, and those answers, along with this year, could go a multitude of ways. These next 30 some days will be the most critical stretch of the season; a time of growth, refinement, and most importantly, learning.

“We constantly have people coming up, [asking], ‘Are you going to make it back [to the NCAA tournament]? Are going to do this, and that, upset a big program?’ I’m like, ‘We’re going to see,'” Robinson said. “That’s my answer every time.

Tweet
About Kyle McFadden 335 Articles
Kyle McFadden is a graduate from Linganore High School's Class of 2014, a sports junkie and general news-hound. He got his start as a sports writer in January 2014 for Linganore's student-run newspaper The Lance, where he wrote 13 articles. McFadden then launched his own blog in October 2014 called The Beltway Dispatch covering collegiate, local high school and professional sports. Formally known as The Beltway Dispatch, McFadden and Evan Engelhard merged respective platforms in June 2015 to make what is now Maryland Sports Access. With baseball, basketball and golf experience, McFadden brings ample knowledge to the helm of MSA. McFadden covers a wide variety of sports in football, baseball, basketball, golf, hockey, lacrosse, soccer and specializes in the collegiate and high school levels. McFadden volunteers his time at Damascus Road Community Church -- serving as a mentor to the youth, basketball coach at the varsity and junior varsity levels, and leads a small group of high school sophomores every Wednesday night. Although he's only been around journalism since January 2014, he's a high school sports reporter for The Baltimore Sun and freelancer for The Frederick News-Post. McFadden's work has also appeared in DMV newspapers The Aegis, The Capital Gazette, The Daily Times (Delmarva Now), The Hometown Observer, Howard County Times, Germantown Pulse and The Towson Times. He's also won two Mike Powell Excellence in Journalism awards and has appeared on The Best of SNO, which showcases top student work of high school and college journalists. McFadden currently studies at Frederick Community College and plans to transfer to the University of Maryland in the fall of 2018 to work on a bachelor's degree in journalism with aspirations to be a national college basketball writer.
Contact: Twitter 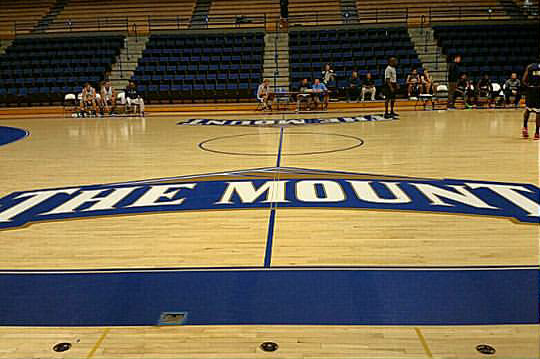