The sign fixes above a locker room passageway as a conspicuous reminder of why he and the 20-or-so senior members of the Damascus High School football team started this illustrious journey on the gridiron way back when. “How will you be remembered?” the sign reads, a question that confronts Michael Jurgens every morning, every evening, every Friday night, every moment. “Hits you right in the face you when walk in,” the burly 6-foot-4, 275-pound lineman Michael Jurgens said. “Legacy.”

As third graders roughly nine years ago, Jurgens and company romped the pee wee competition en route to a youth Super Bowl title. It was their first season as a unit, known as the Class of 2018, under the town’s feeder program, the Damascus Cougars. They went on to win a handful of more championships at the youth level, upstarting the notion of how every season should end: Trophies, confetti, parades and area bragging rights that Damascus is Maryland’s likeliest football capitol. “I’ve heard that a little bit,” Jurgens said.

A year before that, in 2007, Jurgens never considered playing football until he attended his first game: Damascus versus Hereford for the 3A state championship in the purple bleachers of Ravens Stadium in Baltimore. The atmosphere. The lights. The energy. The stage. Watching superheroes donning not capes, but shoulder pads and golden-matte helmets with a green-lettered “D” on both sides. All of that captivated the younger Jurgens, who witnessed Damascus capture its third state title in a five year span in a 40-20 win. “They were like legends back then,” Jurgens said. “When you’re a kid, you don’t know the difference between a high school football and a college football player.”

Not much has changed 10 years later, other than puberty has morphed Division I frames and Jurgens and his senior classmates now play the role as community superhero, tasked with carrying the weighty torch of football excellence at Damascus and not letting the flame die, let alone lose any glamor.

Today, Jurgens’ high school career is the stuff of legends: A 39-0 record with two rings in as many seasons. This Friday, Damascus (11-0) will play in one of the most hyped games in the state’s history against Frederick County’s Walkersville (11-0), a contest that pits two defending state champions in the MPSSAA Class 2A West region final. For Jurgens and fellow seniors, it’s a legacy-cementing opportunity. A triumph puts them two wins away from a historic pinnacle, but a loss, however, sends that to the curb.

After every practice, Damascus players are forced to run 14 hills alongside a slope that funnels into the baseball field, which is tucked in the furthermost piece of property Damascus High has to offer. Up and back is one rep. Fourteen symbolizes how many wins it takes to win a state title.

They obtained the feat in 2015 and 2016. A win on Friday will not only knock out Walkersville, winners of 25 straight and the reigning 2A state champs, but put them – the seniors – in the catbird seat to cap their high school careers with a 42-0 record and three rings, an unprecedented mark in the state’s history. “A lot is on the line,” Jurgens said. “We know all those kids and alumni are looking up to us. We don’t want to let them down.”

Jurgens has lived up to that statement practically his whole football career. He’s only taken one loss at the high school level, one that creeps up on him every now and then. “Freshman year, lost to Seneca [Valley] on JV. Six to nothing. That loss haunts me,” Jurgens said.

Damascus hasn’t lost an actual game since the 2014 Class 3A state against Franklin, when they squandered a 21-point halftime lead and couldn’t respond to the overwhelming speed and athleticism of the Indians. The last time they lost at home was 2013 in the 3A West semifinals versus Urbana. And the last time they lost by more than one-point at home is astounding: Nov. 18, 2011, in the 42-6 rout by Thomas Johnson. “I can picture pretty much every loss I’ve seen [at Damascus] in the past nine years,” Jurgens said. “It’s pretty crazy.”

As a varsity starter, nobody has cracked Jurgens and his beastly line, which also consists of Army commit Jordan Funk (6-3, 230), Sean Rogers (5-10, 220), Max Hoffman (5-11, 240) and Elijah Baisden (6-1, 220). Tight end Matthew Betterelli (6-2, 235) and Bryan Bresee (6-5, 250), the top-ranked recruit in the Class of 2020 and holds offers from the likes of Alabama, Oklahoma, Ohio State, Penn State, among others, back the Hornets’ motive of being the biggest, nastiest dudes on the block. “We want to go out and be the biggest badasses out there,” Funk said after a senior night win against Wootton two weeks ago.

“We want to go out and be the biggest badasses out there.” — Damascus linemen Jordan Funk

Even though Damascus lacks an elite Division I skill player, like Jalen Christian, Jake Funk or Markus Vinson, the Hornets have made it work by committee due to the brute force up front. “No matter who we play, I think that’s our goal: To be the biggest badasses out here,” Jurgens said. “No better feeling than moving someone against their will.”

The Damascus line might have its stiffest test in years as Walkersville is known to bring the lumber with its ground-and-pound style.

Even with a 39-game winning streak, back-to-back state titles and a lineage of success at home to show for, Damascus is – strangely enough – widely considered as the underdog. Damascus coach Eric Wallich, Funk and Jurgens have yet to comment on the outside hoopla generated by social media and local football message boards, but assistant coach Gregg Frazier recently tweeted “Home Underdogs” and senior defensive back and receiver Javier Smith tweeted “The disrespect is crazy.”

Two weeks ago, after Damascus beat Wootton, 49-7, but struggled to put away Patriots until the second quarter (Walkersville led 70-7 at halftime against Wootton earlier this year), Wallich had this to say about the Hornets’ title prospects: “This one, I don’t know. I feel like we haven’t faced a playoff-caliber-2A-West-team yet. … Honestly, until you play, until you get in that situation, you just don’t know how it’s gonna go. There’s a lot of kids on this team that have played in big games and, so, I have no doubt they’re gonna be ready and lead the other players into the battle and teach them what it means to win these type of games.”

It’s been 25 years since the Lions and Hornets squared off in the 1992 2A football state final. Damascus won, 12-7, but Walkersville won in a 1987 playoff meeting, 30-16. They, too, won the state title that year. If history coupled with both programs’ recent dominance is a telltale sign of what’s to come, then the 2A state championship is going down at Damascus High this Friday night.

“When you play them, it’s who can be the biggest badass,” Funk said of playing Walkersville. “I can’t wait to finish it out here. Doing it since I was 7. I’d like to finish it with all my brothers I grew up with.”

After the 42-point senior night win two weeks ago in which they honored 28 members of the Class of 2018, Jurgens paused mid-sentence and peered down the other end of the field where a host of kids in Damascus attire awaited. “We used to be those kids, right there, 10 years ago,” Jurgens said. “Now we’re here getting interviewed.”

Jurgens’ face then illuminated in admiration. Youth is the lifeblood of Damascus football. It’s why Jurgens is where he is. Yet, the moment tugs at him every time. After he fistpumped a few wide-eyed kids who witnessed another signature Damascus win, Jurgens stepped into the locker room, and the sign — “How will you be remembered?” — was there greet him.

“Every day we push to strive toward that,” Jurgens said. “to be remembered the right way.”

Kyle McFadden is a graduate from Linganore High School’s Class of 2014, a sports junkie and general news-hound. He got his start as a sports writer in January 2014 for Linganore’s student-run newspaper The Lance, where he wrote 13 articles.

McFadden then launched his own blog in October 2014 called The Beltway Dispatch covering collegiate, local high school and professional sports. Formally known as The Beltway Dispatch, McFadden and Evan Engelhard merged respective platforms in June 2015 to make what is now Maryland Sports Access.

McFadden volunteers his time at Damascus Road Community Church — serving as a mentor to the youth, basketball coach at the varsity and junior varsity levels, and leads a small group of high school sophomores every Wednesday night.

Although he’s only been around journalism since January 2014, he’s a high school sports reporter for The Baltimore Sun and freelancer for The Frederick News-Post.

McFadden currently studies at Frederick Community College and plans to transfer to the University of Maryland in the fall of 2018 to work on a bachelor’s degree in journalism with aspirations to be a national college basketball writer. 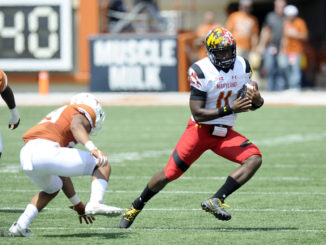